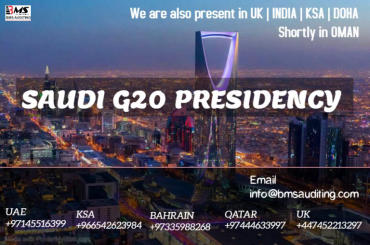 According to new research Kingdom of Saudi Arabia to be the first Arab nation to take over the G20 presidency is likely to deliver a 0.2 percent boost to the kingdom’s non-oil private sector GDP.

In December Saudi Arabia took over G20 presidency from Japan, will see them hosting world leaders for a global summit in its capital Riyadh on November 21-22.

The presidency comes as the oil-rich country has encouraged a liberalisation drive, including giving greater rights to women, but faced vigorous criticism over a crackdown on dissent and the murder of Jamal Khashoggi, journalist.

“Whilst Saudi Arabia’s capital has hosted several large functions in the recent past, the G20 summit differs due to the sheer number of different events related to it. In fact, more than 120 workshops, ministerial meetings and specialized seminars have been scheduled to be held in the kingdom throughout the year.” Said Jadwa Investment.

The kingdom has been participating in the G20 summit since 1999, with the kingdom’s membership being make sure by virtue of its crucial importance to the world’s energy markets.

“In addition to further promoting Riyadh as a suitable business and tourism destination, we see the G20 summit directly contributing to raising the kingdom’s GDP. More specifically, we calculate an additional 0.2 percent being added to non-oil private sector GDP as result of hosting the G20 summit. We see the direct impact of this major event being felt through a rise in business tourism, higher retail expenditure, increased activity in hotels and hospitality sectors and measurable positive impact on the local labour market.” Added Jadwa.