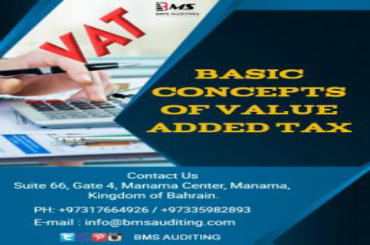 The concept of VAT is new to the GCC and Bahrain and this was mostly the huge first tax introduction conducted in Bahrain in terms of tax on goods and services where the effects are spread on the businesses and the customers. In this context, the for the better understanding of tax the concepts of tax is being detailed here.
The wide division of taxes are :
Across the world, the taxes are classified into two that are Direct Taxes and Indirect Taxes. Direct taxes are those in the form of personal income tax or corporate income tax. When a person or a company make an income, a part of it in percentage threshold is paid in return to the government. In companies, the part of the profit is paid as tax in the form of direct tax. The second type of tax is Indirect tax which is in the form of tax on goods and services such as VAT, GTS, excise, etc.
The method of direct tax is that the tax load is on the person or the corporate who makes the profit out of their business or professional services. This is called direct tax because this is directly recognized towards the person who makes revenue. Whereas it comes in Indirect tax the tax there are two levels of people one on whom the tax load is and the other is the entity who is responsible to collect the tax and remitted to the customer. So in this tax, the tax is charged on the supplier of goods and services. Ie, the tax is collected and paid by the entity who take on the task of supplying goods and services. But the tax load is on the end customer who actually pays for the goods and services. So the supplier passes on the tax to the customer.
In case of VAT, the vat is charged on goods and services which are purchased by the customer they pay the tax and the supplier of goods and services collect it and remit to the Federal Tax Authority. So the business is an intermediary to the government in terms of indirect tax.
ADMINISTRATION OF INDIRECT TAX :
Indirect tax can be managed in multiple technologies which are depended on the objective of the Government. Whether it needed for cover the entire economy or a particular segment, does it aim to tax all or does it aim to tax a particular class of people or business and so on, does it aim to control a specific sector of the economy? The model is selected on the target which the Government aims to achieve.
The basic models are
Single point VAT system and Multipoint VAT system based on value addition.
THE OBJECTIVE OF GOVERNMENT THROUGH INDIRECT TAX CAN BE:
Generate revenue for infrastructure and social welfare which is one of the objectives of the GCC and Bahrain by implementing VAT to reduce the financial burden of the government for finding out the fund for free services to the public such as health, education, transport etc.
Ensure development of the economy across the states and provinces. In some centralized economy, some states or provinces get backward in development. The revenue from the VAT can be deployed into the weaker sections of the country.
The indirect tax also helps to regulate the manufacture, supply, and sale of goods and services in the economy. By indirect tax, the government regulates the consumption of particular goods and services in the market. Such as if the government would like to regulate luxury and guide the public to lead a simple life, the indirect tax on luxury items is set high in that countries. And the essential services and goods are promoted to use and manage simplifies so tax is controlled to zero rates or exempted. Such as education, health care transport etc.
Regulate movement of goods and services within and outside the country. Based on the tax policy and strategy the government can decide which are the critical goods and services which must stay within and which need to be transported. If the government want to control certain goods not to go outside the export duty is high.
So the whole idea of implement VAT is to strengthen the economy of the country and make a discipline on the consumption of goods and services inside and outside the country. And it is to be kept in mind the no business loss their profit from paying VAT but the burden is on the end customer. If the business itself plays as an end user then they are also owed to pay the tax.