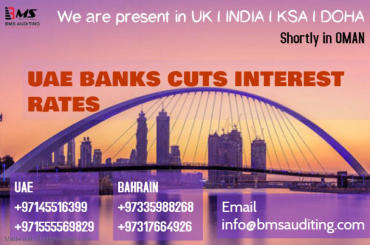 The central bank of the UAE and other leading central “banks across the GCC on Wednesday cut interest rates following the US Federal Reserve’s decision to reduce rates by 25 basis points earlier on Wednesday. This is a move to boost the flagging economic growth. The cut in interest rates will reduce borrowing cost for personal loans, auto loans and home loans etc.

UAE, Bahrain, Saudi Arabia whose currencies are pegged to the US dollar have announced rate cuts. The Central Bank UAE said that it was cutting interest rates applied on the issuance of certificates of deposits by 25 basis points. The central bank also said that the repo rate for borrowing short-term liquidity had been cut by 25 basis points.

Kuwait’s central bank has reduced their benchmark interest rate on Wednesday, joining the Federal Reserve-led monetary easing cycle with its Gulf peers for the first time since July. Kuwait reduced its discount rate by 25 basis points to 2.75 per cent from 3 per cent.

In a rising interest rate environment, banks have the option to change pricing of their loans to higher rates while deposit rates rise at a lower rate with a lag, resulting in improved interest margins for banks. As per the rates drop, the difference between deposit rates and lending rates decrease faster applying pressure on loan yields bank, impacting their profitability.