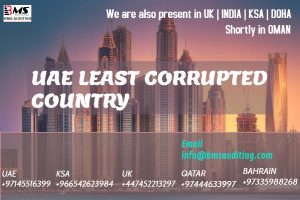 “The region faces significant corruption challenges that highlight a lack of political integrity. According to our recent report, Global Corruption Barometer – Middle East and North Africa, nearly one in two people in Lebanon is offered bribes in exchange for their votes, while more than one in four receives threats if they don’t vote a certain way” said Transparency International.

Saudi Arabia improved by four points with a score of 53. As part of reform of the country the Saudi Crown Prince Mohammad Bin Salman carried out an “anti-corruption” removal in 2017.

After UAE is there comes Qatar, Saudi Arabia, Oman, Jordan, Bahrain and Kuwait