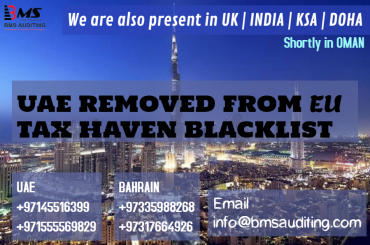 The European Union announced that United Arab Emirates has been removed from list of non-cooperative jurisdictions for tax purpose. The removal will be welcomed by international investors and financial institutions alike.

The largest financial centre the UAE that was blacklisted, was removed because in September it adopted new rules on offshore structures. The European Union said, giving it a clean-sheet on its tax practices. The state does not charge corporate taxes and makes it a possible for firms seeking to avoid paying tax in the countries where they actually function.

The UAE blacklisted in December 2017 by the European Union as a non-cooperative jurisdiction – because it was perceived as accelerating offshore structures or arrangements aimed at attracting (overseas) profits which do not reflect real economic activity in the jurisdiction. This removal of the UAE from the blacklist is the result of the UAE’s commitment to the international standards set by the the EU.

“This inclusion was made despite the UAE’s close cooperation with the EU on this issue and ongoing efforts to fulfil all the EU’s requirements, “said Emirati officials.

The removal of the UAE from the EU’s blacklist will have positive benefits, like the fact that the domestic laws of EU countries that impose more strict conditions on entities in non-cooperative jurisdictions, would no longer apply to entities in the UAE. The UAE can also make use of this development as leverage so as to be removed from domestic blacklisting in countries outside of the European Union.