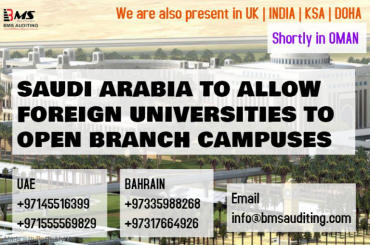 Saudi Arabia will now allow foreign universities to open branches in their kingdom, the Saudi Cabinet said on Tuesday. This step is to make a “qualitative turning point” and “increase competitiveness” in the university education system in the kingdom.

“This creates a variety of educational opportunities for those wishing to join the international universities” said Hamad Al-Sheikh minister of Education.

This decision was widely welcomed on Tuesday, both by education experts and by students who could benefit. In the first phase the system will be applied to three universities, without naming the institutions he confirmed it. The universities will get a transitional period of one year from the date of implementing of the draft law.

A board of members will be appointed for each university. They will be responsible for approving the vision of the university and its mission, objectives, structure and organisational guide, in addition to the approval of the executive rules of financial and administrative regulations, and the nomination of the president of the University.

The Saudi cabinet also approved the King Saud University to sign two draft memorandums of understanding for academic cooperation with UK universities of Edinburgh and Liverpool.