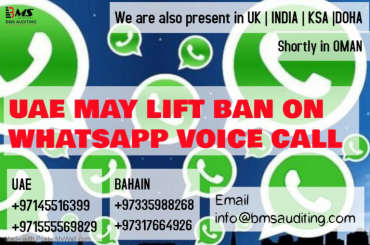 The UAE may lift the ban on WhatsApp voice calls, first free Voice over Internet Protocol (VoIP) services to be available in the emirates.

“The collaboration with WhatsApp has actually increased, and in many of those (projects) we saw a very good understanding (from them) of the concept we have,” he said, referring to the Gulf country’s approach to telecoms regulation. There might be a lift of that ban for (WhatsApp) voice calls… and this is going to happen soon, this is what we know and understand from the telecommunication authority here in the UAE.” Al Kuwaiti, said.

WhatsApp voice calls were banned in the country soon after the service became available. Other Gulf countries have softened their stand on VoIP providers in recent years. In 2017Saudi Arabia lifted its ban on WhatsApp calls.

An Arabic daily Al Ittihad reported earlier, that the UAE telecom regulator was talking with Microsoft and Apple that focus on the potential lifting of a ban on Skype and FaceTime.