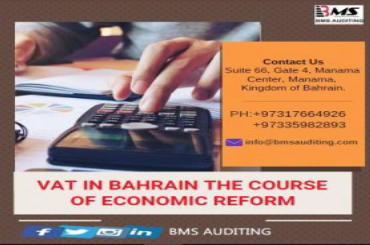 VAT IN BAHRAIN THE COURSE OF ECONOMIC REFORM

The House of Representatives of Kingdom of Bahrain approved a Gulf Arab agreement to introduce VAT after a royal decree ordered parliament to hold an extraordinary session in October 2018.
The now has been approved by the parliament’s upper house, which now into implementation track after a long series of discussion and Kingdom of Bahrain is the third state to implement 5% VAT for the first time.
Introducing VAT at a 5 percent rate was part of a GCC agreement in 2018, is considered a big step for governments that have traditionally levied little tax and relied upon instead on oil revenues.
Other reforms, including changes to the pension system and a new subsidy program, are still pending as part of Bahrain’s efforts to fix its public finances.
Bahrain approved VAT and is on track by 1st January 2019 and the Ministry declared strict legal actions on noncompliance and, spaced spending measures to help improve fiscal balance

The decision of Shura Council, the upper house of Parliament, in October 2018 had endorsed a bill authorizing the introduction of a 5% value-added tax (VAT) to come into effect on January 1 this year.
The decision was seen Bahrain follow other economies in the region, such as the UAE, which introduced their own VAT at the beginning of this year.
The government had at first planned to introduce VAT at the start of 2018, aligned with a GCC-wide decision to apply a goods and services levy in all member states; on the other hand, implementation was deferred due to concerns over a lack of technical readiness in adopting the changes.

Restructuring aims to eliminate government debt by 2022
The initiation of VAT, which the government approximate will generate $2.1bn annually, is part of an ample program aimed at dropping the state deficit and balancing the budget within five years.
In early October the authorities published the Fiscal Balance Program 2018-22. The alteration includes reformation cash subsidies, creating a central procurement unit, building the background of six different workforces to recommend the government on sinking operational expenses and giving financial motivation for public servants to take early retirement in order to reduce state employee levels.
The program is projected to save some BD800m ($2.1bn) annually once fully implemented, with the aim of getting rid of the fiscal deficit by 2022, down from 13.2% last year. It should also help hard work to reduce the overall national debt, which the government places at 87% of GDP.
According to international media, the proposed funding will take the form of a long-term, interest-free loan, to be dispersed gradually.
VAT Implementation on instantaneous consumer spending
In proportion to a report issued by the rating agency, the inflationary impact of the VAT on the UAE economy was self-effacing, and the taxation helped strengthen efforts to expand the base of the economy and improve state revenue flows.
“In the end, it will be good for the country and will help the government continue to construct and maintain the infrastructure that all businesses depend on.” Some experts said
Challenge in Technical Measures Implementation
It proved that The distresses which had persisted that the kingdom may struggle to line up its technical and methodological processes in time to ensure a smooth launch of the levy on January 1 was meaningless even though some confusion is still in the scene,
By comparison, Bahrain had a far smaller period to train the public on the implications of VAT, make clear its exceptions and allow businesses to train personnel on the regulations governing the new levy but it successfully passed the hurdles and now on the track of economic reform.