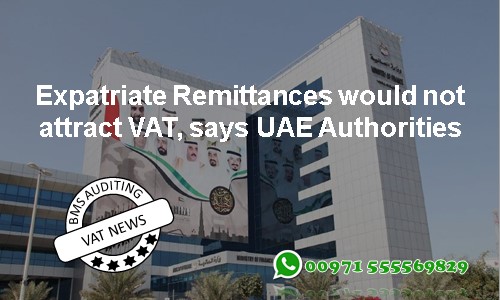 As the Value Added Tax (VAT) is implemented from 1st January 2018, the UAE VAT authorities have clarified that the money remittance outflows will be exempted from levy of tax. “The five per cent VAT tax would be levied on the remittance service fees, rather than the remittances themselves,” said UAE Federal Tax Authority (FTA) director-general Khalid Al Bustani. Foreign Exchange and Remittance Group chairman Mohammed Al Ansari expected the rise in remittance services fees to range between 50 fils and AED1.5.

In a statement to Emarat Al Youm, he said that the planned increase of service fees due to the VAT will have a slight impact and will not affect the remittance outflows. Exchange companies in the UAE would not increase remittance fees when the 5pc VAT takes effect in January 2018, he said. According to Mr Al Ansari, the UAE tops all other GCC countries in the overall volume of remittance outflows, based on Swift Group, the leading provider of financial messaging services. The UAE Central Bank also said that expatriate workers’ remittances outflows topped AED40.8 billion during the second quarter of 2017.

Thus, VAT impact will be at minimal for the remittance as VAT will be implemented just on the service portion and the masses will be at ease with it in the coming times.