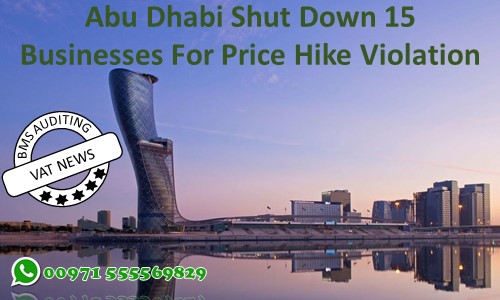 The Department of Economic Development, DED, in Abu Dhabi shut down 15 commercial facilities in the emirate during the month of January due to price hikes on goods.

The step was taken as part of department’s continuous efforts to follow up on the implementation of the circulars issued earlier regarding the utilisation of the value added tax, VAT, in implementation to unjustifiably increased prices since the beginning of the current year.

In January, the DED released a report, which monitors the performance and follow-up conducted by the DED’s Commercial Protection Administration in various points of sale in the emirate for the purpose of detecting any intentional violations against the circulars issued by the DED regarding the commitment to implementing VAT regulations across Abu Dhabi.

Ahmed Tarish Al Qubaisi, Acting Director of the Commercial Protection Administration, said that the DED has conducted 98 campaigns, 50 of which were implemented in Abu Dhabi, 28 in Al Ain and 20 in the Al Dhafra Region. The campaigns focused on the major points of sale and shops in the markets, which are visited by significant numbers of consumers to ensure that these facilities do not raise prices unjustifiably and that they implement VAT for the facilities that are registered in the tax system of the Federal Tax Authority.

Al Qubaisi said that tickets were issued against those facilities that collected VAT without being registered in the tax system of the Federal Tax Authority and increased prices excessively for the period preceding the implementation of the tax by checking the previous bills. This is as per Item No. 77 of the Tickets Schedule in which it is stated that additional fees or services are imposed on the consumer unjustifiably, and Item No. 72 regarding the failure to adhere to the undertaking and the circulars presented by the DED or the instructions, conditions and controls issued by it.

Regarding consumers complaints, Al Qubaisi stated that the DED received 505 complaints during January, 250 of which were received in Abu Dhabi, 210 in Al Ain and 45 in Al Dhafra. He also explained that the consumers mainly complained about an unjustified increase in prices, the fact that the tax value was not stated in the bill and also additional increase in the price over five percent.

Al Qubaisi called upon the consumers to contact the DED through the Contact Centre of the Abu Dhabi Government in case they detect any explicit violations in VAT implementation.